I find the process, and need, that we have to search for tangible objects that existed before us most interesting. Through the tangible we gain an awareness, and understanding, of beliefs systems that supported commerce, politics and personal values. Once found, then we display. Displays are not haphazard. Contrived displays are based off of formal qualities of line, shape, texture and color. 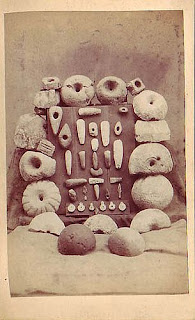 S. Bettoney Roman Antiquities found by Mr. J. Robinson and others in 1880 1880 (or later)   Carte de visite Paul Frecker  LL/12026   A printed paper label neatly glued to the back of one of the cartes informs the reader that these are:

ROMAN ANTIQUITIES
FOUND BY
MR. J. ROBINSON AND OTHERS IN 1880
Photograph of a broken Cinerary Urn found embedded in calcined human bones and charcoal whilst digging for Roman Remains in the fourth field north of the Roman Station, Maryport, on the 26th April, 1880.

The pieces of the Urn - thirty-two in number- have been skilfully affixed by MR. WILLIAM BERRY GRAHAM, who has thus restored the Urn to the original form which the Potter gave it some 1,500 years ago."

Source link here.
Posted by Laura Mongiovi at 9:41 AM