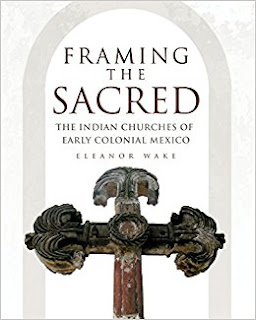 Native Sacred
-A place of beauty in the making, as opposed to the beauty made.
-Elite residents worked with the Life-Giver to negotiate everlasting but mortal deliverance from earthy suffering.
-Mortals could and should not enter the sacred.
-Sacred enters individual.

Motifs - narratives - "song of wind" - fauna, wildlife - the architecture anticipates the arrival of the sacred.

Color
Blue and Red - two vital fluids of the cosmos - Water and Blood
Black and Red - chromatic metaphor for sacred metaphor.
Despite the availability of extensive range of pigments these colors dominate.

16th century Indian Mexico
Image of Christianity was not copied - rather read and rewritten.
Churches perceived  as the living replicas of the landscapes/ out sacred  features.

Ayaucalli - "mist house", a temple or group of temples dedicated the rain deities.
Oyoalli - hollow, pear or almond shaped create ornament, associated with pulque gods, possibly used as a rattle instrument
Tzoalli - mixture of amaranth seed with honey or maize flower used to make effigies of deities and other sacred things.
Xonecuilli - "twisted foot", name give to ritual "breads", often in shape of "S" to represent lightning or in the shape of a butterfly, name of a star of constellation.
Posted by Laura Mongiovi at 10:27 AM No comments: