Shawnadithit: Last of the Beothuk

All three women were sick with the consumption that was a plague among the Beothuk. Shawnadithit's sister died and soon it was obvious that her mother was dying too. Shawnadithit took her mother to a sandy point by the waters of Red Indian Lake, held her in her arms and sang her people's last lament. She sewed her body into a blanket of birch bark, buried her and set out alone for the coast, stumbling out at Notre Dame Bay. She knew now that she was the last of her people.
The Beothuk were a semi-nomadic people who wintered around the shores of the beautiful lakes of the interior of Newfoundland, where they hunted caribou and other game. In the spring they would paddle off downriver to the coast to hunt seal and salmon, fashioning most of what they needed along the way. They built unique conical birch houses called mamateeks which featured double layers of birch and moss insulation.
Excerpts from:
Posted by Laura Mongiovi at 3:47 PM No comments: 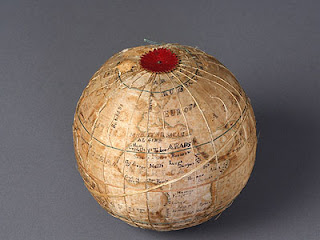 The turn of the 19th century was a time of tremendous change on the North American continent, as new nations established their laws and societies. Among many other transitions, education was changing for young women. In the nascent United States, secondary schooling for girls proliferated for the first time. Academies taught the old domestic skills, such as sewing, music, and fine etiquette, but they also taught “solid subjects,” such as mathematics, history, and geography. In this moment came an object that blended these shifting educational domains: the embroidered silk globe.

Posted by Laura Mongiovi at 3:36 PM No comments: