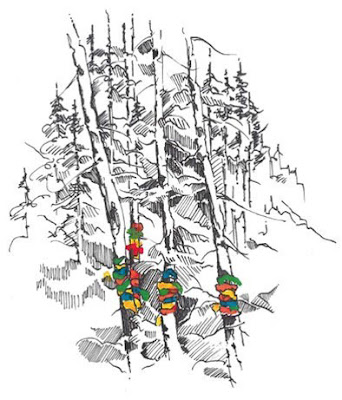 Ribbon trees are much more than just pieces of fabric tied to trees.  The ribbons and cloths are actually offerings back to the earth.
Ribbon trees are appearing more frequently in Jasper National Park, placed by Indigenous communities that have historic ties to this landscape.  Swatches of colourful broadcloth, known as prints, are tied to trees (most often aspen) usually following a sweatlodge or pipe ceremony conducted by members of First Nations groups.
Prints are deeply personal and represent the prayers, hopes and aspirations of participants. At the beginning of the ceremony, the participant presents neatly folded prints to the sweat keeper or pipe holder.  The prints are received and blessed and remain either at the keeper’s side or in the case of the sweat lodges, they festoon the willow interior of the turtle, like a willow structure, until the ceremony is over. Afterwards, it is customary to leave these cloth prints tied to a tree due east of the ceremonial site to weather and eventually disintegrate as the energy from the prints is sent to the Creator.
Different coloured cloths represent the four cardinal directions as well as earth elements: water, sun, wind, rain, thunder and lightning. Many practitioners of native spirituality are able to decipher the meaning of so called ribbon trees by merely observing the array of colours.
The majority of ribbon trees found throughout Jasper’s Three Valley Confluence are believed to be placed by communities whose ancestors previously used these lands before they became part of Jasper National Park in 1907. Many of these communities participate in the Jasper Indigenous Forum and some have formal agreements for access and medicinal plant collection with Jasper National Park.
Because of the need for privacy for certain ceremonies, ribbon trees tend to appear in remote areas. If you happen to see or come across ribbon trees please keep in mind they are sacred.  They are also a positive and important sign in a long term, evolving process of reconciliation with our Indigenous people, who have ties to the landscape.  Parks Canada asks that everyone respect any ribbon tree sites they encounter and leave them as they are found.
The agency is committed to ensuring that interpretive materials and activities at all national parks are respectful of Indigenous traditions, cultures and contributions to Canada’s heritage. June is an important month for Indigenous peoples leading up to National Aboriginal Day celebrations on June 18.  The Simpcw First Nation, the People of the North Thompson River, will be the host nation for the annual event in Jasper National Park on June 18th.
Parks Canada
Special to the Fitzhugh