ORMOND BEACH -- In the late 1700s, plantation owner Richard Oswald used his British land grant for thousands of acres in Volusia and Flagler counties to produce sugar, rum, indigo, molasses and oranges.
One of his slaves died in her mid-30s, her body wasting away to a skeleton that eventually washed ashore at what’s now Tomoka State Park.
The discovery of her skull 28 years ago and other bones in ensuing years put state medical examiners on a hunt for more information. Finally, nearly 300 years after she lived, investigators have confirmed she probably was a slave who worked at the Mount Oswald Plantation.
“Miss Oswald,” as she has been named, will receive a proper burial Saturday, thanks to the efforts of Mary Summerall, president of the Oakridge Cemetery Association.
It was nearly 28 years ago when the skull washed up on the shore of Tomoka State Park, north of Granada Boulevard and west of Beach Street. A medical examiner determined there was no foul play on the very old human cranium so it was sent off to the University of Central Florida for study.
Four years ago, more skeletal bones were found along the Tomoka River shoreline in the same area. Again the medical examiner determined there was no foul play, and it was thought the bones likely matched up with that skull. The additional skeletal findings were sent to the university. The skeleton, still incomplete, turned out to be one person.
Late last year, the university issued a forensic anthropology osteological analysis disclosing the bones were likely that of a 30-something female slave from the Mount Oswald Plantation.
The university’s findings revealed fragments of the pelvis, skull and jaw features were those of a woman. The teeth helped determine age and race. Femur and tibia measurements estimated Miss Oswald was approximately 4 feet, 11 inches tall.
Porter explained the teeth were inconsistent with Timucuan Indians, the native race in the area when it was discovered by Ponce de Leon in 1513, until they were exiled to Cuba in 1763, according to historic records. But skull traits and stature were consistent with an African female.
“The possibility of this individual being a slave, certainly is -- although not absolute -- a very good possibility, given the biological profile assessment and the history of early plantations in the area,” Porter said.
“We are going to place her in a baby casket,” Summerall said.
The journey of Miss Oswald will end, more than 300 years after she worked the lands of a thriving plantation, but the circumstances of her death and the cause will remain a mystery.
Read entire article - source:
http://www.news-journalonline.com/news/20110602/bones-believed-to-be-slave-womans-to-be-buried-in-ormond-cemetery

Posted by Laura Mongiovi at 6:13 PM No comments: 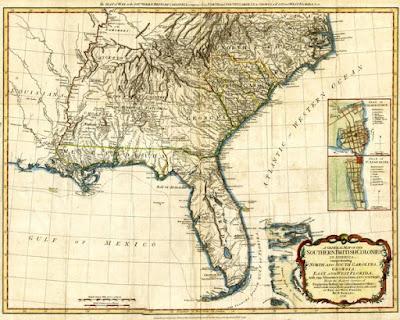 A General Map of the Southern British Colonies (1776). Note the separation of East and West Florida.

The British only owned Florida for a brief moment (1763-1783), but during that time they did take a stab at turning the territory into a productive colony.  In 1764, the British Parliament set aside £500 (British pounds sterling) as a bounty for cultivating silk, cotton, and indigo in East Florida, and authorized generous land grants for citizens who stepped forward to develop these industries.
The British government took a considerable interest in New Smyrna, providing money for transporting laborers and developing infrastructure. In the spring of 1767, Turnbull sailed into the Mediterranean to hire workers for his new enterprise. He encountered unexpected resistance from the Ottomans over his plan to hire away Greek workers, so he made stops in southern Italy and Minorca to pick up more. By the time Turnbull finally sailed for East Florida, he had about 1,500 workers under contract, mostly Minorcans. These settlers would be indentured servants.
Source: http://www.floridamemory.com/blog/2014/05/14/dr-andrew-turnbull-and-the-origins-of-new-smyrna-beach/
Fur Trade

Posted by Laura Mongiovi at 5:58 PM No comments: 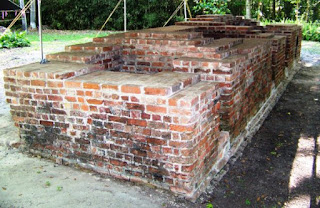 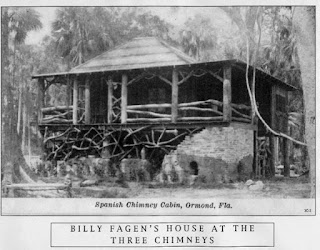 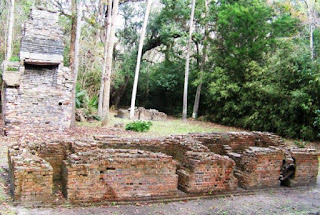 
source: https://ormondhistory.org/the-three-chimneys-sugar-works-site/
Posted by Laura Mongiovi at 5:38 PM No comments: 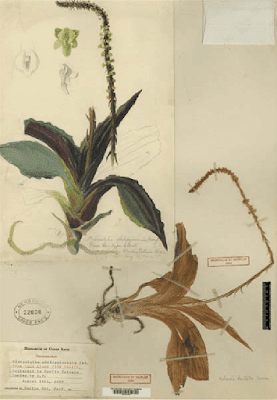 Figure 5. Specimen of Malaxis dentata collected by Oakes Ames with watercolor by Blanche Ames, in the Oakes Ames Herbarium at Harvard University.

During WW-II, she patented a new kind of fabric wire to dangle from barrage balloons and trap enemy airplanes.
source: https://www.uh.edu/engines/epi1795.htm

During World War II, Ames came across the realization that thread could snarl and jam a sewing machine motor, Blanche then used that same principle to design a device to ensnare low-flying aircraft. The machine was demonstrated on the lawn at Borderland for guests from the Pentagon. Although it was accepted by the U.S. Army, it came too late for it to be applied in war.[16] wkipedia

Ames attended the Rogers Hall School in Lowell.[3] She was later one of few women of her time to attend college,[4] earning a B.A. in Art History and a diploma in Studio Art from Smith College in 1899.[3][5] She was the president of her graduating class.[4]wkiipedia 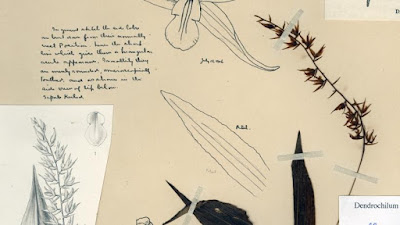 Blanche Ames’ name is familiar to many for her varied accomplishments as an artist, botanical researcher, and activist. Her truly pioneering spirit and action-oriented attitude also led her to create a number of inventions, adding to her reputation in the early 20th century as somewhat of a “renaissance woman.”Born into a prominent family in Lowell, Massachusetts, on Feb. 18, 1878, Ames was the daughter of General Adelbert Ames, an American Civil War union officer who would later become Governor of Mississippi, and Blanche Butler, daughter of Benjamin Butler, who was Governor of Massachusetts and ran for President in 1884 against Grover Cleveland. Ames was one of six children.She earned a bachelor's degree at Smith College in 1899, where she also served as class president. In 1900, she married Oakes Ames (who was unrelated), a botany instructor at Harvard University. The couple had four children before 1910. Meanwhile, Ames, a talented artist, published cartoons in favor of women’s suffrage and, continuing from her college days, was involved with the Massachusetts Suffrage Association. She and her husband built a mansion in North Easton, Massachusetts on land they called Borderland, where she had an art studio. There she painted portraits for prominent people in the area, continued to draw political cartoons for publication, and began illustrating orchids for her husband to accompany his research.Ames became very well known for her orchid drawings, producing hundreds of them over a 50-year span, mainly related to her husband’s research in orchidology. Together, the Ames created a comprehensive body of research on the Orchidicae class of plants and also developed the Ames Charts, watercolor-illustrated charts showing important plants’ phylogenetic relationships. A staunch Republican, Ames was a political activist as well, an outspoken feminist who worked hard to achieve women’s right to vote and women’s rights to birth control. She co-founded the Birth Control League of Massachusetts in 1916, a regional chapter affiliated with Margaret Sanger’s national initiative.Through all of these activities, Ames was an innovator who was constantly thinking up new devices, processes, and policies that she hoped would make the world a better place. This included inventing. During World War II, she invented and patented a method for using strings held by balloons at high altitudes to try and trip up the propellers of enemy planes. The concept was said to have been demonstrated to military officials at Borderland, but it came a bit too late and was never actually used in the war effort.She also patented a toilet design that she hoped would be better for the environment. She also developed, with her brother, Adelbert, a scientific method for mixing paints to certain color specifications. She created a method for cutting hexagonal shapes in wood. She designed and created plans for many of the dams and ponds surrounding her home at Borderland, and even worked on ways to breed a more disease-resistant turkey.
source: http://lemelson.mit.edu/resources/blanche-ames

Blanche Ames Ames was well known as a witty pro-suffrage political cartoonist. In all of her political endeavors, she was actively supported by her husband.
In 1941, Ames became a member of the corporation of the New England Hospital for Women and Children. NEH was run entirely by women for women and children. Its purpose was to offer same sex medical care to women. In 1952 due to financial difficulties, the board of directors opened itself to the possibility of hiring male staff. Ames vigorously fought to maintain the hospital’s almost 100 year old charter. In 1952, as president of the board, Ames successfully spearheaded a massive fundraising effort which raised sufficient funds to ensure an exclusively female staff and administration for the hospital.
source: http://www.harvardsquarelibrary.org/biographies/blanche-ames-ames/ 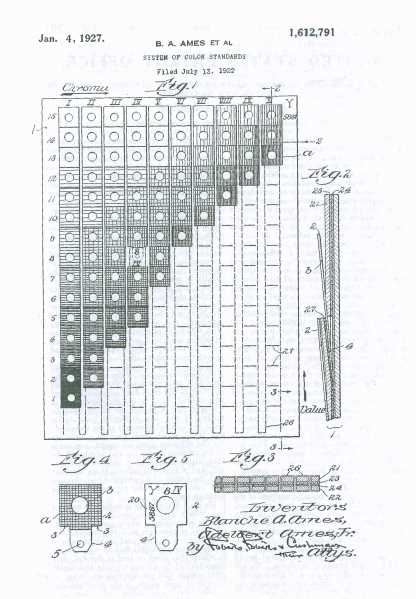 Blanche was a creative thinker and sought out ways to improve the quality of life. She received three patents over the span of 50 years. Her first patent was on January 4, 1927 for a system of color standards which she invented with her brother Adelbert Ames, Jr. The object of the system of colors was to provide uniformity of colors through individual color cards in order that a desired color could be identified. Up to this point there was no such system in place for professions that worked regularly with colors, such as painters, decorators, dressmakers, and potters. Figure 1 displays a drawing of the system of color standards.(Ames & Ames, 1927) 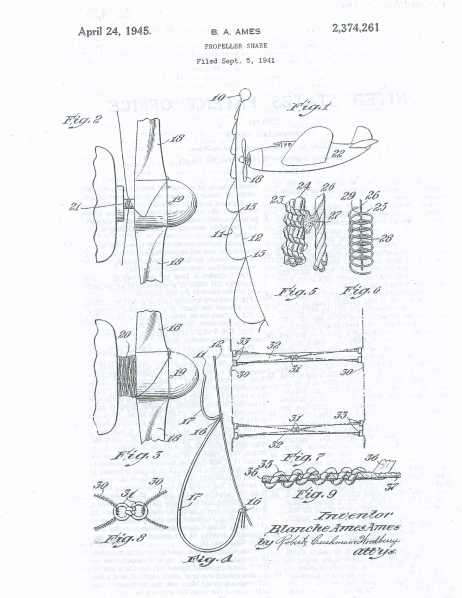 source for above images and text: https://brendapolendey.wordpress.com/cultural-research/4-technology-blanche-ames-inventions/ 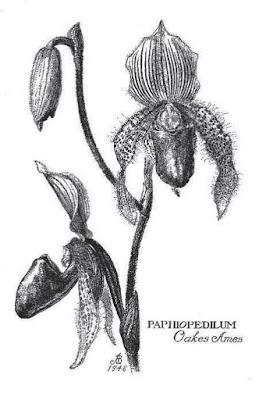 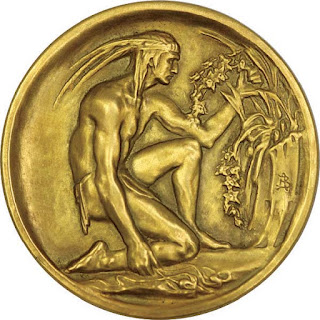 Once, in Rio de Janeiro, Oakes learned of a Brazilian orchid that had been discovered decades earlier and sent abroad to the foremost authority on the area’s orchids. The specimen was lost en route; its only ghost was a watercolor drawing that had been made before it was sent. Because the drawing did not show enough detail to classify the orchid, and no further specimens had been found, the species remained in a kind of scientific limbo. Returning later from an expedition to Brazil’s Mount Itatiaia, Oakes and Blanche found a large fallen tree blocking their path. Growing on that tree was a single orchid—incredibly, it was a specimen of the lost species. Blanche, not Oakes, was given the discoverer’s honor of the taxonomic name: Loefgrenianthus blanche-amesiae.

above text and images source: https://harvardmagazine.com/2017/07/blanche-ames 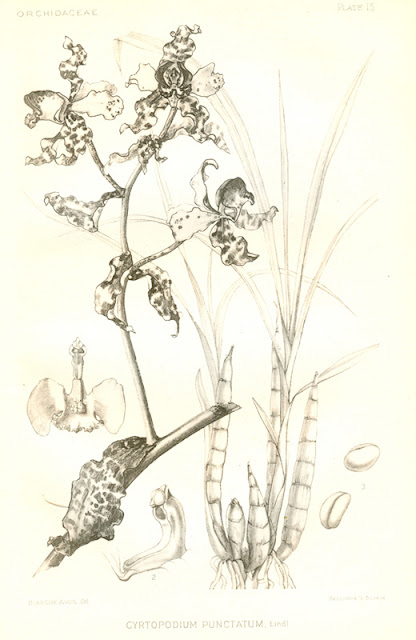 OrchidaOrchidaceae, titled after the family that orchids belong to, was written by the world-renowned botanist Oakes Ames. Ames began collecting orchids at the ripe age of 15 in his hometown of North Easton, Massachusetts. He graduated from Harvard College in 1898, and soon thereafter founded the Ames Botanical Laboratory, where he studied both orchids and ethnobotany. Ames was a pioneer in both fields, being one of the first botanists to study plants that are economically and culturally important to human cultures, as well as writing the most thorough treatise on orchids the botany community has ever seen--the seven volume Orchidaceae.
above image and text source: https://cumuseum-archive.colorado.edu/Research/Objects/apr09_orchidbook.html 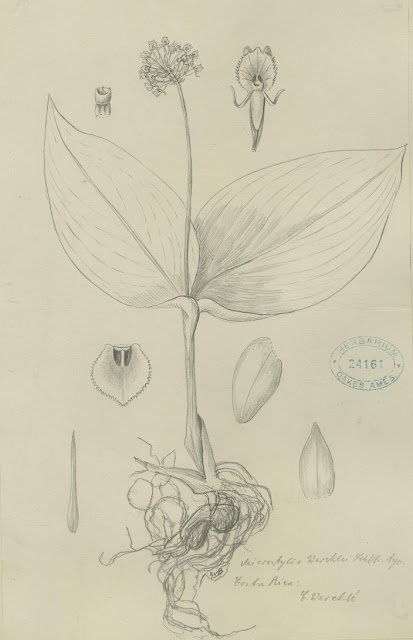 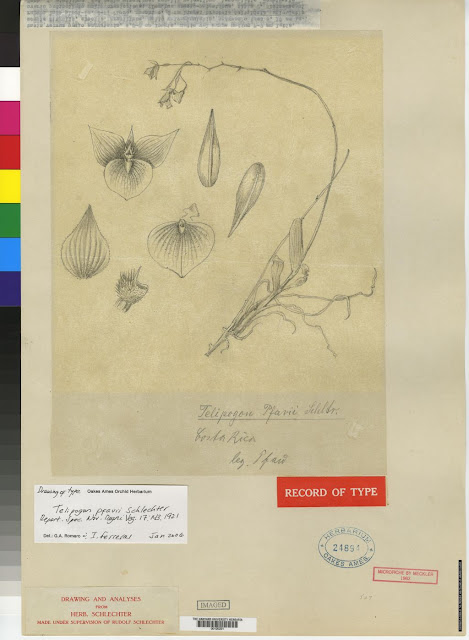 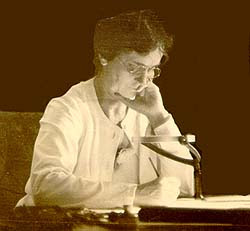 Posted by Laura Mongiovi at 10:26 AM No comments: