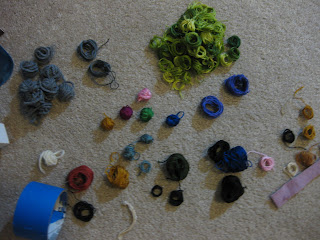 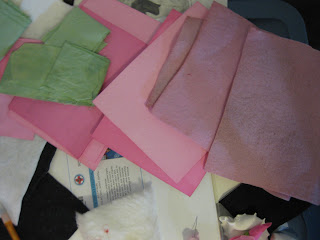 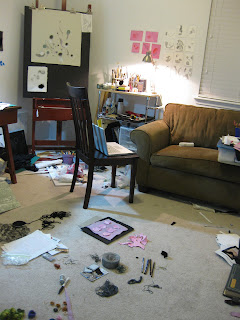 Posted by Laura Mongiovi at 9:02 AM No comments:

Tokens at the Foundling Museum in London

The exhibition is entitled Threads of Feeling: 18th Century Textiles left with Abandoned Babies at the London Foundling Hospital.  There is an on-line slide show of the fabric samples.

"These trinkets are transitional objects - severed umbilical cords - that embody the grief of separation".
"...sentimental objects, which seem to evoke larger narratives of loss and grief..."
- The Tokens, Christopher Turner, Cabinet Magazine

Sometimes a token was broken in half, so if the mother returned she could match her half of the token with the token left with the child.  Seems as if this process was most often used by women who were illiterate.


"Tokens were left as 'identifiers' - they were not gifts for the children, keepsakes or love tokens, as has often been stated. They were official 'documents,' easily recognisable items that could be used to prove the identity of an infant if the parent or parents found themselves in circumstances to take it back. Since the tokens were first put on display in the 1860s, these small but speaking methods of identification have been giving life to individual moments of separation and loss. Yet having been removed from their admission records, these compelling scraps of personal history were themselves orphans. Now, thanks to eight years of painstaking work by Janette Bright and Gillian Clark, many of these tokens have been reunited with the children to whom they belonged, revealing the circumstances surrounding their arrival at the Foundling Hospital." -text and image from the Foundling Museum. 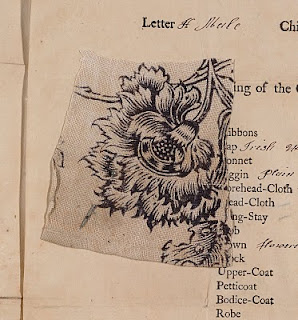 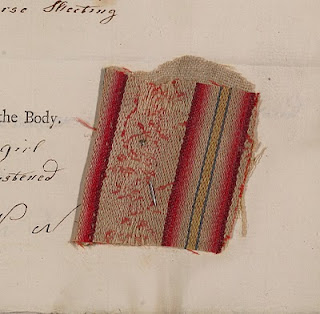 If no token was left with the child, a swatch of fabric would be cut from the child's clothes.  One half of the swatch was kept with the child's paperwork and the other was given to the mother.  I found the images above on the Textile Treasure Seeker blog.

Some other information I collected:
The hospital was established in 1741 for the maintenance and education of exposed and deserted young children.  Children baptized and renamed.  Wet nurses paid well for keeping their babies alive.  Two-thirds of those died.  Over 16,000 children left between 1741 and 1760, 152 reclaimed.  Children left - illegitimate, poverty, rape, not married or simply unwanted.  Also found a foundling hospital in florence Italy, built 1419 and approx. 375,000 children were abandoned.  Rather than murder children, women could leave at hospital and therefore not have sinned. After the Civil War, poverty, immigration, inadequate housing and financial depression triggered the abandonment of children.  More info found here, The New York Foundling Hospital.  In the little research I have done on these three locations, it seems as if London was the only hospital that had tokens.
Posted by Laura Mongiovi at 7:56 AM No comments:

This summer I visited the Rubin Museum of Art in New York City.  This is a wonderful place - if I lived in NYC I would take advantage of all the Rubin offers - exhibits, lectures, music, art making, film and a restaurant. You can link here to see the programs offered.

One of my interests is objects made for reasons that support a belief system.  The amulet box has always interested me - a portable shrine.  Not only is it an object but it creates a space, a place to worship. I pulled some of my notes on other objects and spaces and posted information and my thoughts below.


From what I have read, the Ark has not been revealed but is housed in a church in Ethiopia. Someone is with the Ark at all times and the public is not allowed inside the building.

After the death of the Buddha, the relics of His body were collected from the funeral pyre and divided into eight parts. Stupas were erected on the relics. The practice of pilgrimage in Buddhism probably started with visits to these places, the purpose of which was to achieve personal advantage such as rebirth in a good location, as well as to honour the great master.


The below text is from an exhibition at the Rubin entitled Pilgrimage and Faith.  Link here.

"For millennia people of all faiths have embarked on the practice of pilgrimage, journeying to a sacred place or shrine of special religious significance, while proceeding at the same time on an inner, spiritual journey. Objects associated with pilgrimage—whether works of high artistic skill or those intended for everyday use—often reveal deep human needs that transcend particular faiths.
Pilgrimage and Faith explores these important spiritual journeys in three of the world's largest religious traditions: Buddhism, Christianity, and Islam. While reflecting on the shared goals of personal development and communal solidarity evident in each tradition, the exhibition also highlights their particular ritual practices and artistic expressions.
The exhibition features diverse examples of objects from each faith, including a Chinese Buddhist pilgrimage map, a Tibetan Buddhist hand prayer wheel, a twelfth-century Christian reliquary casket, Muslim clay prayer tablets."
Posted by Laura Mongiovi at 2:10 PM No comments: