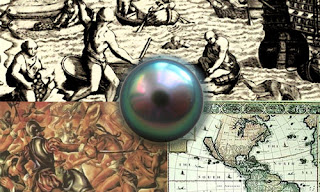 The commerce of pearls in Mexico is as old as the pre-Columbian era, when Mayan and Aztec dealers went wide and far within the confines of their Empires to fetch magnificent pearls for their emperors and gods. Excavations in several archaeological sites have revealed large black pearls within the tomb of a Zapotec  ruler (750-500 a.C), the biggest discovery taking place at site 7 of Monte Alban, Oaxaca.
After the Conquest of the New World by the Spaniards, a tremendous “pearl fever” afflicted them and thus began the establishment of pearl fisheries in this Continent. The first pearl beds to become exploited were those of Venezuela, yielding small white-golden colored pearls, but their fever rose to new heights when they finally reached the Pacific coastline.The first pearls to be called “black pearls” and also as “South Sea Pearls” where the ones fished out of the Mexican, Central American and South American waters of the Pacific Ocean (christened by explorer Vasco Núñez de Balboa as “Mare del Sur” -“The South Seas”). Places like the Gulf of Nicanor in Costa Rica, the “Islas de las Perlas” (or “Pearl Archipielago”) in Panama, the coasts of Oaxaca and Jalisco became famous for their large black pearls.
Later on, expeditions were sent to discover the “Sea of pearls”, later christened as the “Mare Bermejo de Cortés” (loosely translated as the “Red Sea of Cortez” and now officially known as the Gulf of California), to obtain the biggest and darkest pearls known at that time. Some time later, merchant and pirate ships from Holland, England and Russia, would appear in these waters, trading whatever valuables  they could for the famous Pearls of the Sea of Cortez…
Image and text source link here.
Posted by Laura Mongiovi at 5:25 PM