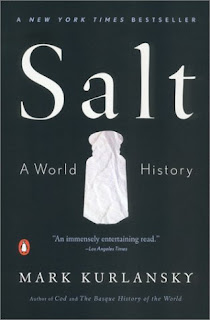 "Homer calls it a divine substance, Plato describes it as especially dear to the Gods, and we shall presently note the importance attached to it in religious ceremonies, covenants, and magical charms.  That this should have been so in all parts of the world and in all times shows that we are dealing with a general human tendency and not with any local custom, circumstance or notion."

"In every age, people are certain that only the things they have deemed valuable have true value."

"The history of the Americas is one of constant warfare over salt.  Whoever controlled salt was in power.  This was true before Europeans arrived, and it continued to the reality until after the American Civil War."

"...various grades of salt were produced, from the whitest for the rich to a black, unpleasant-tasting salt for the poor."

"To the British admiralty, the solution to a lack of sea salt was to acquire through war or diplomacy places that could produce it."

Link here to my Pinterest board where I collect imagery and information for salt. 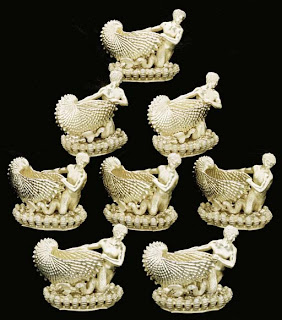 AN IMPORTANT SET OF EIGHT GEORGE IV SILVER-GILT SALT CELLARS Mark of Paul Storr, London, 1822 Each on shaped oval wave-capped base, supporting a triton pulling a nautilus shell, each marked on shell, triton and base 5¼in. (13cm.) long; 145oz. 10dwt. (4530gr.) (8).  Source is Christies.  Link here.
Posted by Laura Mongiovi at 6:10 PM