Click on title above for link. Source is Dianabuga's Blog.

"A variety of agricultural and food-related technologies were developed in the Middle East during the Medieval Period and introduced by means of trade through the Mediterranean as well as by conquest – or as part of the Crusaders contact with the region." 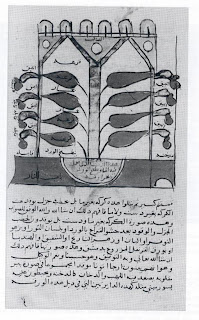 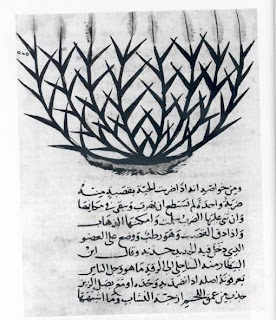 "According to some historians of perfumes, the Arabs became for several centuries the perfumers of the world… It is reported that among the many presents of Harun al-Rashid to Charlemagne were several types of perfumes.

Forbes, the historian of technology, says that only with the coming of the golden age of Arab culture was a technique developed for the distillation of essential oils. By distilling their favourite flower, the rose, the Arabs succeeded in extracting from it a perfume that is still a favourite all over the world – rose water. Rose water came to Europe at the time of the Crusades.

Damascus was famous for its rose-water. We have detailed descriptions in the literature of rose-water distillation installations in Damascus. It was exported to several countries including Europe.

According to Arab geographers, rose water was distilled also in Jur, and in other towns in Fars. The rosewater of Jur was the best quality and it was exported to all countries of the world including: the Rum (Byzantium), Rumia (Rome) and the lands of Firanja (France and Western Europe), India and China."
Posted by Laura Mongiovi at 9:13 PM